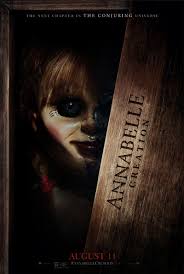 Ill be the first to admit that i dont know why i even saw this movie.  Never really cared or enjoyed the original,  so why was it necessary to create a prequel to a prequel/origin film? Dont get me wrong,  Annabelle is a very creepy doll,  by hollywood standards, that is, but put into the creative hands of James Wan and you get the next best thing to a nightmare fueled overdose. In case you didnt know, the actual annabelle doll is a ragedy anne doll and,  just like in the Conjuring,  Annabelle has been locked in a glass box ever since the Warrens discovered she possessed evil entities.
That was the definite thing missing in this film,  James Wan.  He and Leigh Whannel created the Conjuring universe and you can always tell what has their creative touch and this movie lacked it by the masses.
Horror movies,  nowadays have managed to melt into one another. The scares are cheap, the story is dull and your main antagonist becomes more of a joke by the third sequel. Horror icons havent been what they use to be. When Freddy Krueger or Jason Voorhees made their mark, back in the day, it was memorable and new. The "killer doll" persona has claimed victory by the likes of Chucky or Fats the dummy,  if you remember that Anthony Hopkins movie.
This movie wasnt very fascinating or moving or memorable. It was just dull and followed the regular status quo that horror movies tend to follow. The only shining moment in this film was the main actress. Most young actors make a film cringeworthy because they simply cant act and they dont have the years of experience to draw from for emotional scenes. Thisbyoung woman was charming and intimidating especially when it came to her scenes of trying to kill.
One thing i felt this movie tried doing was force a new spin-off down our throats. As some may know,  in the near or distant future,  THE NUN,  which was a big part of the conjuring 2, is having a movie made. In Annabelle:creation, they made sure that you knew that it was coming.  It was almost a piggy back ride to another spin-off that will probably be less that perfect.  Aside from that, i wasnt at all moved by Annabelle. She belongs as a subtle part of the conjuring movies.  A little reminder of her existance, nothing more.
Posted by Unknown at 8:17 AM