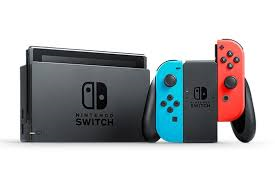 THE NINTENDO SWITCH
If you're a gamer and you are not very familiar with the above image, then you're either a SONY or MICROSOFT nut or you have been living under a rock with Patrick Star. THIS, is the Nintendo Switch, a sleek new handheld and home gaming console from the people who probably made your childhood the best it could be. Nintendo has been the original heavy weights when it comes to their gaming consoles and products in general. In a nut shell, if you've never played a Nintendo product, you still might know who Super Mario is or maybe even Donkey Kong or Link. Nintendo has inadvertently made an impact in your life in some way shape or form. Nintendo always seems to be the first gaming company to be new or fresh and never seems to rehash any of their old console designs. They take what was good and make it better or in other cases, they take something they might have been a little lackluster about and improve where they went astray.
Let's start where things became imaginative and worlds were divided by levels (World 1-2). For me, I have always been a fan of the Italian plumber who manages to find himself in outlandish scenarios just to find a princess who probably could care less about him from a mutated turtle king.
I'm trailing away from the point, the NINTENDO SWITCH. I got my hands on one of these beauties and it's definitely a beauty. Everything about the SWITCH's display and controls and layout is super easy, something very new and different from the WII U whos layout and menu options were scattered and hard to understand.
The option of going from home console to handheld is obvious the big driving factor to the SWITCH's features and it's one of the smoothest features a console can have and the best ever! Who would've thought of combining two of the three forms of gaming? Those two being handheld and home gaming, the third being online. 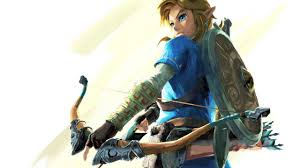 THE LEGEND OF ZELDA: BREATH OF THE WILD
One of the few titles that launched with the NINTENDO SWITCH was the highly anticipated OPEN WORLD game "The Legend of Zelda: Breath of the Wild, the LARGEST game to date with a map that almost seems endless. Now, I'm not biased at all when it comes to Zelda cause I'm simply not a fan, never have been growing up and I'm still not crazy about it now, but this game blew my mind wide open a d as I sat in my brain juices, I explored the vast new world of Hyrule. It's definitely one of those games for die hard Zelda fans that really drives it home with excitement and adventure from start to finish as you build Link from the bottom up with weapons, clothing and armor. This game is also a solid starting point for anyone like me who have never set hands on any previous version of Zelda.
At this point in the game, I haven't been able to experience much with the switch, but I'm in nerdy love. GAME ON, MY FRIENDS