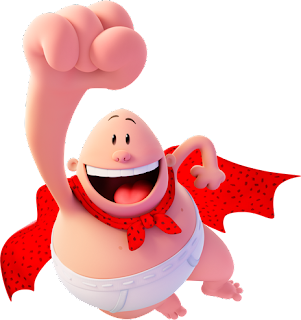 What a fun trip down nostalgia lane. Just got out of Captain Underpants: The First Epic movie and I was so so soooooooooo beyond pleased with it. So far, 2017 has been a great year for film and I'm hopeful that it just keeps getting better.
There's nothing too serious about this movie that I really need to break down, because it is exactly what it is, it's a captain underpants movie, enough said. I was initially worried because it had the voice talent of Kevin hart, who I feel is just so over the top in his acting that it even shows in voice over work, like The Secret Life of Pets, but this movie is intentionally corny and silly that he actually blended in well with its surroundings. I couldn't think of anyone better to voice George Beard. Ed Helms was a spot on Principal Krupp/ Captain Underpants. I had no complaints at all about this. I went in with hope that DreamWorks wouldn't destroy an innocent thing that I enjoyed as a child, but they did the opposite and reminded me why I loved these books and their crazy off-beat stories and characters. I obviously took my son who enjoyed it just as much as me, if not more. There comes a great time in a father and son movie experience when you're laughing at the same potty jokes. I wouldn't trade those moments for the world.
If you don't know who captain underpants is, take the kids and fill their minds with this tremendous ride and laughter.
Enjoy.
Posted by Unknown at 4:11 PM