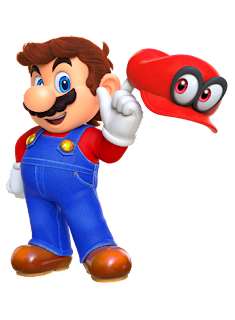 "LET'S-A-GO!"
This week at the 2017 E3 conference, Nintendo brought a ton of new things to the public eye, everything from new additions to beloved series and DLC expansion packs for things like THE LEGEND OF ZELDA: BREATH OF THE WILD, all new titles for both of Nintendo's latest consoles, the Nintendo Switch and Nintendo 3DS and a small bit of Nintendo WII U, but the thing I was interested in was "what can I expect or look forward to with Super Mario Odyssey?" We got a first look trailer a few months back and it only gave us the idea that this was another Mario sandbox game. We hadnt been given a great free-roam game since Super Mario Sunshine. You could argue and say we had Super Mario 3D Land, but that was still a game that had a designated path from start to finish with each level having a common goal and that was the final flag pole and the collection of 3 large gold coins. A sandbox game allows players to venture from the initial story line and do a side mission or two. you were never fully bound to one goal. This was also displayed in Super Mario 64. the player had free roam of the mushroom kingdom and each level, within different paintings, were different goals and stars to collect. This time around, Nintendo has graced us with, what seems to be the LARGEST, Mario game to date. What we have been able to see, so far, is this vast open world that Mario can play and explore in. One particular example is the "New Donk City" world, basically a rip off of New York City FILLED with Donkey Kong references. This map is gigantic in comparison to other Mario maps and levels. It's also filled with so many different things to play with and do! This is only one amongst many worlds to explore and tinker with.
There is a few new features to this game that haven't been seen in Mario games before. One being the capability to throw your new found ally, Cappy, a ghostly spirited top hat that takes form as Mario's classic hat to aide him in his journey, onto almost any living or inanimate objects and posses, including enemies. That's right, if you ever felt like playing as Mario wasn't fun enough, you can toss your hat to the nearest koopa or goomba and literally become them. This is a new feature that allows so many new possibilities within the original story. The second, being the capability to change your outfit. Many people who are familiar with the mustached plumber are the original blue overalls, red shirt, white gloves and emblem hat. Odyssey allows the player to dress Mario up as they please. In the Nintendo Treehouse segment at E3, we got to see 2 examples of this. In the TOSTERENA map, you're able to dress Mario up in classic mariachi attire, sombrero and all. It doesnt stop there, in the rainforest map (Im unfamiliar with the name at this time) you can dress him up as an explorer, a steve irwin lookalike if you may so call it.
I've always liked games that allowed customization to characters. It gave the feel that this was YOUR game and no one elses. Odyssey gives you that feel. It gives you the possessing feeling that YOU alone are playing with Mario and not just following the italian plumbing, coin jumping status quo that every other player in the world was doing. This excites me on so many levels! I have hope that this game is going to be challenging and ultimately endless in its game play and history. I feel that it will, most definitely, stand up against it's predecessors and make it's mark in gaming history.
So far, i'm excited and absolutely can NOT wait for October 27th.
GAME ON, MY FRIENDS!!!!
Posted by Unknown at 1:15 PM