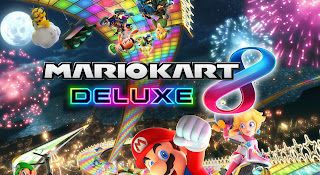 Now that I have had some time to play around and get the feel of what the NINTENDO SWITCH can do and is capable of, I was ready to actually have some fun and whats more fun than racing with our favorite multi-talented italian plumber, Mario? I bought my copy of MARIO KART 8 DELUXE and really havent put it down since. What MK8 has is a lot more than what it's original title had, which was released on the NINTENDO WII U and that's every unlockable character, every track and every circuit (50cc-Mirror and 200cc) This game is also the first game I've personally enjoyed playing online. I'm not a huge online player, but when it came to Nintendo and their online games, it was usually disastrous and lagged almost every time. This game also has what it's original does not and that's the online battle mode which is my favorite on this title, more specifically, coin runner or bob-omb battle. It's a great add-on and addition to the Super Mario universe and Mario Kart family. Next in the Mario universe is the reported Mario and Rabbids Kingdom Battle followed by Super Mario Odyssey. One of those I'm over the moon excited about, the other...I'm slightly confused, BUT nonetheless, should be a fun and entertaining experience.That's for another time. Buckle up, shift into maximum effort and overdrive (Yes I made a deadpool reference) and go for gold with Mario Kart 8 Deluxe!!!