Pirates of the Caribbean: Dead Men Tell No Tales REVIEW 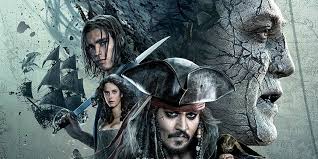 Another pirates adventure has come and sailed away again...and in my own personal opinion, for good.
I had a date night with the wife and saw the latest in the Pirates of the Caribbean series subtitled, Dead Men Tell no Tales and I was thoroughly pleased with the outcome. Most of the time when a movie gets 5 entries deep, it starts to recycle alot of old characters or drags on the story longer than its original welcome. Somehow, PIRATES manages to always come up with a fresh tale to capture audience's attention. DEAD MEN TELL NO TALES is no exception with its new character additions and storyline. The one thing this movie managed to do is put to rest a lot of open plot holes or character arcs. I won't say much about it, but one climax in the finale mimicked Guardians of the Galaxy Vol. 2 a bit almost to a tee, but it didnt distract me from its meaning and purpose to the storyline, however I did feel like it was rushed and was something that was needed to create a quick connection to two characters while giving a bit of depth to another. It was too much in such a short period of time without a clear reason why this character did what they did...oh well.
Johnny Depp is always great as Captain Jack and I hate those who think he is becoming a mockery of himself. He's just a fantastic character actor. Captain Jack is always a staple in the movies who never needs any type of introduction or development, although we saw a small glimpse of the young Jack sparrow in a brief flashback.
This movie has everything needed from the ones it followed to help make a great time for pirate fans. Definitely a good time and definitely a great addition to the series. Considering how it ends, I hope this series stops here, not because I don't want it to continue, but simply because I'd hate to watch a good thing die off so slow and sadly.
Enjoy.