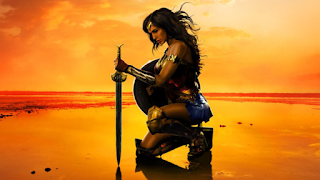 Wonder woman was, dare i say, wonderful! I realize DC has struggled in critic and fans eyes with making a good film within their new shared film universe. While i, personally have enjoyed each installment, starting at MAN OF STEEL, to BATMAN V SUPERMAN: DAWN OF JUSTICE, and most recently SUICIDE SQUAD, I can see where most people are left with a little sour taste in their mouths. They haven't been Marvel movies where almost each addition is absolutely outstanding and stellar or at least acceptable for the film universe's sake, but they've just started and are still on their baby feet. Wonder woman is a great turning point for great things in the future. My one problem with the storyline was the motivation at the climax of the film that was off putting and unsettling for the origin of this character. I won't spoil any part of it for anyone, but if it was a subtle thing somewhere WITHIN wonder woman's character arc, I would've classified this film as a perfect origins movie for the character. After all, this was the characters first stab at a big screen adaptation and aside from that little tid bit, it was incredibly solid and exactly what DC needed to move forward with future installments. The supporting characters were even interesting to watch and chris pine, who played Captain Steven Trevor, was a great opposite to gal gadots Diana Prince.
The next thing we can look forward to comes out this November with the first part of Justice League which is shaping up to be an excellent follow up to wonder woman.
This is the part where I usually feel okay with my quick review, but I'm having a hard time wrapping this one up. I'm going to take that as a good sign.
I'm under the enchantment of the lasso of truth: this movie has been the best ive seen so far this year next to guardians of the galaxy volume 2.
enjoy