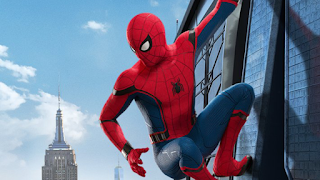 Managed to see SPIDERMAN: HOMECOMING which should probably be renamed SPIDERMAN: THE PIGGY BACK EASTER EGG HUNT.
don't get me wrong, there was a lot about this movie that I was over the moon about, but I can't help feel that this movies main driving force wouldn't exist had it not had iron man in it. It almost said, we can't do this movie without him and that left me feeling cheated out of telling a good spiderman story. Every time peter would do something, good or bad, iron man would show up, or happy hogan, in this case, and fix or comment on what just happened. You almost start to side with Tony stark on how annoying peter is being and how much trouble he is causing.
Aside from that, it's villain was on point. They could've trashed this character like marvel usually does, but instead they had Michael Keaton doing what he does best and kicking ass. Nothing to complain about there.
Peters friend, ned was the worst friend and character in the movie. I, personally, couldn't stand his screen time. I understand you need a humanistic ego to your SUPERhero and that part was being played by ned, but damn it, if I was spiderman I would've webbed his ass in some cocoon and hid him far away from humanity, where he belonged.
Overall, it's nice seeing spiderman play along with other marvel characters. It's good, too, to see him back with the marvel family. I just hope that in his next solo outing that he proves he can bring in the bucks on his own. Can't wait to see how he fits into infinity war.
Cheers!!
Posted by Unknown at 5:45 PM