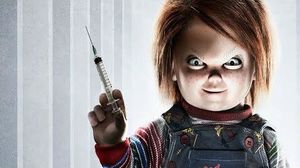 For those who are not aware, my favorite slasher from the 80's is and always will be, Chucky, otherwise known as Charles Lee Ray. I own both a Chucky and his dashing Bride, Tiffany dolls and I unfortunately have yet to get my hands on their love-child Glen/Glenda. Chucky has been around for years. This year, 2017, we will have yet another installment in the Chucky/Child's Play series titled CULT OF CHUCKY. The thing I love most about the chucky movies is the originality that each installment brings. Each film follows the original storyline and keeps adding layers to this killer doll. Over the last decade, chucky took a turn into the comedic genre with a dash of horror, but, to me, it wasn't a far stray from its source material. I've come to love each installment as their own as well as a whole in the series.
Now, in CULT OF CHUCKY, we have a film following the events from CURSE OF CHUCKY. Nica, played by Fiona Dourif and is also real life daughter to the voice of chucky himself, Brad Dourif, has been institutionalized. Through therapy and a rough coping process, she is to believe that she is the one responsible for the death of her family members set in the events of CURSE OF CHUCKY. Which, in reality, Chuck is the one who single-handedly killed her family. Eventually, in group therapy, her group therapy mentor brings out a good guy doll to help lead the group to feel comfortable with a story that was previously terrifying. From there, the rest is history.
This movie reunites a ton of original cast members from the Child's Play series, including Alex Vincent, the actor who originally played Andy Barclay in the first 2 child's play films and then briefly in an after credit scene in CURSE OF CHUCKY. We also have Jennifer Tilly reprising her role as Tiffany/Herself.
There are alot to speculate from this trailer. My biggest fear is this film will take the turn that the original Child's Play was meant to be. Most people never knew that the original Child's Play was meant to be a psychological film revolving around Andy and his split personality and decent into madness. Andy himself was the one responsible for killing the victims in that film and managed to convince a few people that it was his good guy doll. Fortunately, a test audience thought it was carp and loved the idea that chucky was actually an evil possessed doll.
I hope this method and story isn't poured into CULT OF CHUCKY. This trailer leads me to believe that and puts me a little on edge. Every aspect they are treating Chucky like a figment of everyone's imagination. It would be a side story explaining a bin full of loons coping with ones story, but if they are trying to convince us, the audience, that chucky hasn't been real this entire time or no longer will be, I will have lost respect for Don Mancini and this entire creative team. I, however, have hope that they won't screw us over like that and CULT OF CHUCKY will be extremely superb.
Wanna Play?
Posted by Unknown at 6:13 PM